Why Perisher is the Best Place for Snow Fun 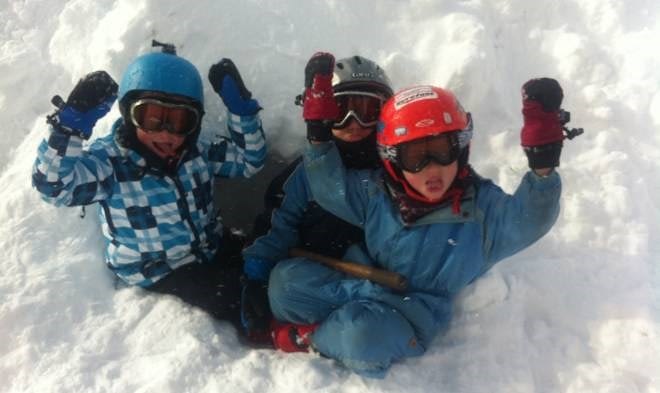 There’s plenty of snow fun to be had at the moment at Perisher Ski Resort in Kosciuszko National Park. If your kids have never seen snow before, now’s the time to bring them to Perisher for both skiing and non-skiing action – what kid doesn’t love hot chocolate, making a snowman or throwing snowballs? The Lobban and Ginsberg families enjoyed all these activities recently on their Perisher snow holidays, check out their stories.

All rugged up and ready to throw snowballs.

Sandy and John Lobban brought all the grandkids down from Sydney for an extended family holiday this winter to enjoy Perisher Ski Resort. A couple of their grandkids had never seen snow, so they were keen to show them snow-covered trees and get them making a snowman.

“They were out until almost dark sliding up and down all the snow piled up near the carpark. Running and catching snowflakes,” says Sandy “They were so excited to just be there, even if they weren’t skiing.”

Byron 7 and Jesse 5, loved their non-ski time just as much as their ski action. “We built the best snow cave next to the pub (at Smiggins). We were going to camp out there and throw snowballs at people and play capture the flag”.

Both boys love their hot chocolates and went inside periodically to get a warming drink. In between bites of sandwich and toilet breaks the family was treated to updates about the epic snow ball fight waging war outside. “You should’ve seen Jesse’s face. It was covered in snow,” Byron’s eyes gleam as he remembers the image.

Their mum, Emma, happily passed the time warm and cosy inside the pub while the rest of the family skied. “The view is spectacular, there are definitely worse places to pass a few hours sipping coffee and reading a magazine while minding the baby. Absolutely beats Sydney”.

Downstairs in the arcade underneath the pub the souvenir shop did a good trade. Jesse was pretty happy with his snowman with spinning lights. Grandmother Sandy bought it for him and hit the clothes store as well as the souvenir shop across the car park. “It was so lovely to sit and have a cup of tea and watch all the kids playing. They were quite happy just to be out there mucking around in the snow”.

Making the most of Perisher

A great spot to watch the grandkids.

“We all had lunch at Smiggins on the second day. Two of us headed off downstairs to eat burgers, the others went upstairs to the pub because it had more bistro-style food. All were happy with their meals”.

After lunch they set their sights on the dedicated toboggan area, to the right side of Perisher, which proved to be a big hit with both kids and parents. “It’s double the size of the toboggan area at Thredbo. Be careful to remember it closes at 4pm if the excitement of the day gets away from you,” mum Katrina cautioned.

The next day the family caught the ski tube from Perisher to Blue Cow and had lunch while son Asher took a two hour snowboard lesson. Daughter Maya played happily in the snow underneath the restaurant at Blue Cow. The rest of the family marveled at the beauty of the mountain view from the restaurant drinking hot chocolates and relaxing in the sun that beamed in from the windows.

Ski Rider takes the hassle out of getting to Perisher

If you’re not a confident driver or wouldn’t know where to park up at the resort, Ski Rider is a great Perisher accommodation option. With nine shuttle buses up to the mountain a day, the worry about what to do with a car is taken away. Shuttle rides are free for our guests and the bus stops directly outside the ticket office at Smiggins and right outside the ski tube in Perisher.

Repeat Ski Rider guest Paula Tocquer says “The bus is really good. It’s pretty much on time and it’s great when you have kids. It lets you off right at the door.”

So why not take advantage of our easy access to Perisher for a memorable family snow holiday? We have last minute deals for the end of August or check out our awesome Spring Special for the 7th to 20th September including: accommodation, dinner and breakfast, as well as ski or snowboard equipment hire. We hope to see you soon!

The best deals delivered right to your inbox!

Sign up and be the first to know about discounts and sales, and special coupons to help you plan your next big Perisher snow holiday.